Landfill Body Is Idetified as That of Missing Florida Girl

The sheriff in charge of the case said Thursday, authorities have tentatively identified a body found in a landfill as that of 7-year-old Somer Thompson. Somer Thompson from north Florida disappeared on her walk home from school. 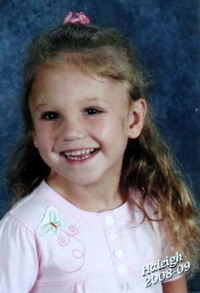 Landfill Body Is Idetified as That of Missing Florida Girl

Sheriff Rick Beseler said the tentative identification was based on clothing and on a birthmark that matched the girl's.

The partially covered body of the child was found Wednesday in a Georgia landfill near the Florida state line, after investigators followed garbage trucks leaving the neighborhood where the child disappeared Monday.

Beseler said at a news conference he fears for the community until a suspect is apprehended. He wouldn't talk about what evidence police have recovered, or whether investigators believe the crime was committed by one or more people. He said police have questioned more than 70 registered sex offenders in the area, and that process was continuing, The Associated Press reports.

Sheriff Rick Beseler said that he had given mother Dina Thompson the grim news before speaking to the press.

Authorities will work to pinpoint where the garbage load that contained the girl's body came from, Beseler said. The garbage that was brought into that part of the landfill was collected in the Orange Park area, Beseler had said Wednesday, noting that authorities routinely search garbage when a missing person case has been initiated.

"There is a child killer on the loose," the sheriff said. "I fear for our community until we bring this person in."

Rewards totaling $30,000 have been offered for information leading to the arrest and conviction of whoever is responsible

The investigation has now turned into a murder probe, CNN reports.