Friday a suicide bombers attacked a police station in Peshawar, Officials said, at least 11 people were killed in the latest of a series of bold attacks against security installations in Pakistan. 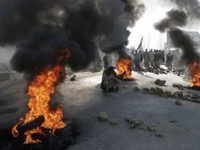 The attack appeared to be carried out by three bombers: one who drove a car laden with more than 200 pounds of explosives, and a team of a man and a woman a motorbike, said Liaqat Ali Khan, the chief of police in Peshawar.

The car detonated first, ramming into a wall of the police facility, Mr. Khan said, then the pair on the motorbike came under fire from soldiers guarding a nearby residential compound. The female attacker was shot, but managed to get close to the police station before detonating explosives she had been carrying, he said. Female suicide bombers are rare, if not unprecedented, in Pakistan, The New York Times reports.

It was also reported, three officers were among those killed in what appeared to be a twin bomb attack. The upper floor of a nearby mosque was badly damaged and a crater left in the road outside.

"First I saw a blue flame then a loud explosion. When I got there I saw six bodies lying on the ground. I helped gather up body parts," witness Saadat Changhzi told the AFP news agency.

Police now believe a woman seen near the scene on a motorcycle was an innocent victim and had been a passenger on a motorcycle travelling behind the car bomb, reports the BBC's Aleem Maqbool in Islamabad, BBC News reports.

Meanwhile, Pakistani forces attacked the Taliban in their South Waziristan stronghold on Friday with aircraft and artillery.

A day earlier, 40 people died in a string of attacks on security buildings in Lahore and bombings in the northwest.

The government says a ground offensive against the Pakistani Taliban in South Waziristan is imminent and the army has been stepping up its air and artillery attacks in recent days to soften up their defences.

Also on Friday, police said dozens of people had been picked up in overnight raids in slum areas of Lahore and neighbourhoods populated by Afghans, Aljazeera.net reports.

Author`s name: Editorial Team
19:01
Putin: EU's refusal of Russian energy resources is an economic auto-da-fé
16:56
Finnish parliament votes for country's membership in NATO
15:47
Finnish admiral suggests Russians be buried in the land of Finland, as in 1939
13:06
Moscow says Finland and Sweden's entry into NATO will 'untie' Russia's hands
12:53
Kremlin declared the United States hostile to Russia
21:11
Ukraine blows up ammonium nitrate to accuse Russia of chemical attack
19:35
German Leopard 2A4 heavy tanks spotted in Ukraine
18:42
Russian large landing ships disappear from naval base in Novorossiysk
18:00
Chechnya thanks the West for the weapons supplied to Ukraine
17:46
Ukraine can skip Membership Action Plan on its way to NATO
Hotspots and Incidents
Up to 16,000 Ukrainian soldiers entrapped in Luhansk People's Republic