Officials said Friday, 100 people were killed by landslides in the mountains of the northern Philippines, as a lingering storm and excess water from dams turned a portion of one province into "one big river," officials said Friday. 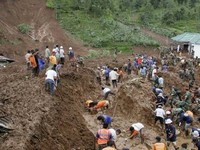 The latest calamity brought the death toll to more than 400 from the Philippines' worst flooding in 40 years after back-to-back storms started pounding the country's north Sept. 26.

Landslides blocked the roads to the mountain city of Baguio in the heart of the Cordillera region and exact figures were hard to get.

"We are still accounting, but all in all our estimate is there were about 100 dead in the four major landslides," Luces said. "Retrieval operations are ongoing," The Associated Press reports.

The New York Times quoted Nathaniel Cruz, the government’s chief forecaster, as saying, "There was really heavy rain, so water had to be released from the dam, otherwise it would have been more dangerous. Even our office was flooded and our staff had to move to the rooftop. It’s near the river that they were monitoring."
Local officials said Friday afternoon that 90 percent of Pangasinan Province was flooded by water coming from the release at the San Roque Dam, and the water in other provinces was rising as well.

In the Pangasinan town of Villasis, floodwaters had covered the town in ankle-deep water by Thursday afternoon, prompting thousands of residents to seek higher ground or evacuate, said Lolit Santos, a resident, by telephone.

"It has been raining here for three straight days and this is the first time this happened to us," Mrs. Santos said, adding that she and her family might evacuate, The New York Times reports.

In the meantime, about half a trillion pesos (10.7 billion dollars) in loans are at risk from defaults due to two tropical storms that ravaged the Philippines, Dow Jones Newswires quoted a central bank official as saying Friday.

The figure quoted by Nestor Espenilla, the central bank deputy governor for supervision and examination, is equivalent to nearly a quarter of the Philippines banking systems' loan portfolio, the report said.

Tropical Storm Ketsana killed 337 people as floods swamped 80 percent of Manila on September 26, while Typhoon Parma has so far killed more than 90 people and is currently devastating farming areas in the country's north, AFP reports.