Monday foreign and Afghan forces launched an assault against a group of Taliban in an area of eastern Afghanistan. According to an official, during the operation the militants killed eight American soldiers at the weekend. 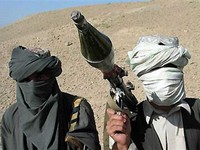 Saturday's attacks in remote Nuristan province near the Pakistani border were the deadliest on U.S. forces in more than a year.

Nuristan's governor, Jamaluddin Badr, said foreign and Afghan troops besieged a group of Taliban in an area of the province's Kamdesh district on Monday, but did not give further details.

"The operation started this morning," Badr told Reuters by phone. A press officer for U.S. and NATO-led troops said there was "activity ongoing" in the area but gave no further details, Reuters reports.

The attack began in the early morning hours. Taliban-linked militiamen struck from the high ground using rifles, grenades and rockets against the outpost, a cluster of stone buildings set in a small Hindu Kush valley that has been manned by 140 U.S. and Afghan forces. By the end of a day-long siege, eight Americans and two Afghan security officers were dead, marking the highest toll for U.S. forces in over a year.

The deaths brought into stark relief the dilemma the Obama administration faces in Afghanistan. Without more soldiers and supplies, the Taliban and allied insurgents are gaining ground, but committing more forces could sink the country deeper into an increasingly deadly and unpopular war.

Several U.S. soldiers were injured in the attack, Rear Adm. Gregory J. Smith, a U.S. military spokesman, said Sunday, but he did not specify the number. The province's deputy police chief, Mohammad Farouq, said more than 20 Afghan soldiers and police had disappeared since the fighting began and may have been taken hostage. A Taliban spokesman said the district police chief and the intelligence chief were among the hostages, The Washington Post reports.

In the meantime, President Barack Obama's national security adviser, retired Gen. James Jones, says decisions on how best to stabilize Afghanistan and beat back the insurgency must extend beyond the issue of troop levels to improved governance and how best to foster economic development.

The debate over sending up to 40,000 more U.S. troops to Afghanistan is just one element that senior policy advisers will consider this week, as they gather for at least two top-level meetings on the administration's evolving Afghan policy.

Jones offered a mild rebuke Sunday of Army Gen. Stanley McChrystal, the top commander in Afghanistan, for making a public call for more forces during a speech last week in London. It is "better for military advice to come up through the chain of command," said Jones.

But he also said that McChrystal "is in it for the long haul," beating back suggestions that the general's public remarks could jeopardize his job. "I don't think this is an issue," said Jones, The Associated Press reports.