In Samoa flattened homes and debris-filled swamps are searched, while survivors told of being trapped underwater or flung inland by a tsunami. The tsunami waves ravaged towns and killed at least 150 people in the South Pacific. 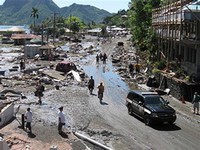 The day after the disaster struck, officials were expecting the death toll to rise as more areas were searched.

"To me it was like a monster — just black water coming to you. It wasn't a wave that breaks, it was a full force of water coming straight," said Luana Tavale, an American Samoa government employee.

Samoan Prime Minister Tuilaepa Sailele's own village of Lesa was washed away — like many others on Samoa and nearby American Samoa and Tonga. He inspected Wednesday the southeast coast of the main Samoan island of Upolu, the most heavily hit area. He described seeing "complete" devastation, The Associated Press reports.

Aid is starting to reach the Pacific islands devastated by a powerful earthquake and a resulting series of tsunami waves. The death toll on American Samoa, Samoa and Tonga and is expected to rise as authorities reach villages cut off by the disaster.

Power and telecommunications remain cut on much of Samoa and American Samoa, as island residents struggle to recover from the disaster.

There are reports of entire villages being washed away by the tsunami waves that hit moments after a magnitude eight earthquake struck the islands.

Getting a full assessment of the damage and the loss of life is difficult. The United States, New Zealand, Australia and other nations are still rushing rescue and recovery workers to the distant islands, Voice of America reports.

In the meantime, Martin Hatfull, British ambassador to Indonesia, said U.K. citizens were likely to have been caught up in the quakes.

He told BBC Radio 4's Today programme: "Our main concern is really for the welfare of British citizens who may be caught up in the first major earthquake, which has done a great deal of damage.

"We don't imagine that there are very large numbers of British travellers there because it's not a major tourist destination, but it's quite popular with independent travellers who go backpacking and there's very good surfing on the island off the coast."

Mr Hatfull said it was difficult to determine how many Britons were affected because communications had been damaged but that contact had been made with two or three, BBC News reports.