Manila: 80 Percent of Capital Is Under Water

In the Philippines the death toll mounted. At least 103 are confirmed dead, the National Dusaster Coordinating Council said. Meanwhile the government said it’s struggling to cope with effects of flooding brought on by the heaviest rains in four decades. Two more storms formed east of the country. 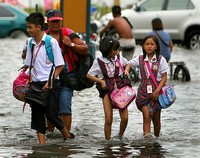 Manila: 80 Percent of Capital Is Under Water

The death toll doesn’t include those that haven"t been officially reported, Defense Secretary Gilbert Teodoro told reporters in Manila. While waters have been receding since the Tropical Storm Ketsana passed on Saturday, many remain in still-flooded areas.

"We really feel their anger and pain, but it is physically impossible to reach each and every one with the conditions that we face," Teodoro said, Bloomberg reports.

It was also reported, the sun shone Monday morning and many Filipinos were happy that their lives were slowly inching back to normal as the floodwaters caused by tropical storm Ketsana began to recede in some areas.
But in Pasig City, one of the hardest-hit Manila suburbs where the heavily silted and polluted Pasig River flows, the floodwater in many communities hardly decreased.

"The water is not moving," a tearful Nene Monfort, 71, told ABS-CBN television. She said she and her family were trapped on the second floor of their apartment and could not come down because of the water.

The disaster was the worst the capital had experienced in nearly half a century. Ketsana poured a month’s worth of rain onto Manila in just 12 hours, the government"s weather bureau said.

The Philippine government declared a "state of national calamity" in 27 provinces, The New York Times reports.

In the meantime, more than 80 percent of the capital was under water at one point Sunday. The deluge swallowed whole houses and buses.

"Right now the challenge is to find out how many people have actually died and how many people we have to take care of in terms of people who've been displaced," said Richard Gordon, the chairman of the Philippines National Red Cross.

Officials worried that if the rains return, they could bring more floods if reservoirs burst.

"We're hoping that there will be no more breaching of the dams," Gordon said. "That's one of the things that are very disconcerting to many people right now," CNN reports.