We have officially touched bottom in the doldrums of summer TV. It came at 8 p.m. Wednesday with the start of "Octomom: The Incredible Unseen Footage" on Fox. 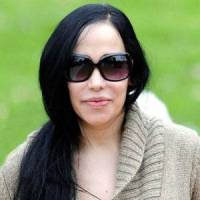 The reality TV special was two hours of film of Nadya Suleman, her 14 children, her parents and the birth of her octuplets -- all of it in search of a story line or a reason for being on TV.

I love cinema verite documentaries, the formula to which this production seemed to aspire. But this was not cinema verite filmmaking, this was cinema slop sleazeball exploitation , Baltimore Sun reports.

That’s just one of the many pearls of wisdom dispensed by Nadya Suleman on last night’s “Octomom: The Incredible Unseen Footage.” Sorry FOX, but I think you oversold us. For those who missed it (and I hope, for your sake, you’re in that category) the two-hour special was largely Suleman waving off concerns that 14 children might be too many to handle and complaining about a loss of privacy. She showed off her new house, hid from paparazzi, got a tattoo, and spent a little time with the octuplets, too. Back when the babies were born, 23 percent of Americans followed the story very closely, according to the Pew Research Center. I, admittedly, was among them. Now though, I can hardly make it through a two-hour television special , Newsweek reports.

All things considered, most of last night's two-hour Octomom Special on Fox with "never-before-seen footage!" wasn't that surprising. I mean, we knew she was a little, eh, quirky , going into this, right?

But there were moments when Nadya Suleman managed to be revealing, shocking and even funny (in the not-on-purpose sort of way) , The Daily Blabber from iVillage reports.