Quentin Tarantino's latest flick Inglourious Basterds hits cinemas on August 19, so to celebrate we're giving you the chance to win a trip to his home town: Hollywood! You and a lucky pal will jet off to Los Angeles and see first hand what makes the Pulp Fiction director tick by visiting some of his favourite haunts in the movie capital. 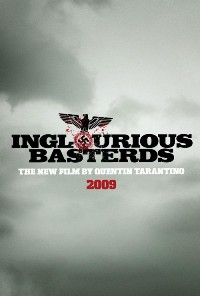 The tour will kick off in authentic American style with a drive around the city in a luxury Sedan.

Sit back and enjoy the ride as you check out some of the iconic film locations that feature in his movies.

Then pull up outside The New Beverly Theatre to catch a movie in one of Tarantino's favourite cinemas, The Sun reports.

How did Tarantino feel about rewriting history? He uses admirable logic in arguing that he did not: "At no time during the start, the middle or ever, did I have the intention of rewriting history. It was only when I was smack dab up against it, that I decided to go my own way. It just came to me as I was doing what I do, which is follow my characters as opposed to Chicago Sun-Times reports.

By now, you know that Quentin Tarantino's "Inglourious Basterds" is in theaters on Friday. You know it's got Nazi killers, scalpings galore and dialogue cooler than Freddie Jackson sipping a milkshake in a snowstorm . But where does it take Quentin's unique universe? , MTV.com reports.