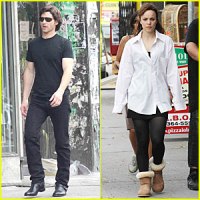 Time travel is a plot device most often employed in the what-if style of speculative fiction. Like: What if you could go back and kill Hitler in the cradle? Would you do it?

But The Time Traveler's Wife takes it a whole other way: using time travel as the hero's tragic flaw and saving grace, while telling the kind of dramatically romantic story that attracts women like moths. It's the movie equivalent of an Oprah book - full of feeling with just enough ideas to make you think about it (but not too hard).

Based on a 2004 best-seller by Audrey Niffenegger, The Time Traveler's Wife stars Eric Bana and Rachel McAdams as Henry and Clare, who meet near the beginning of the film an unusual fashion: He works in a Chicago research library and has a secret; she already knows his secret - and has known him all her life, though he says he's never met her before , Huffington Post reports.

The Hollywood star made an unannounced visit to the film's première in New York - much to the delight of the crowds, but surely to the disappointment of leading man Eric Bana.

He joked around with the crowd before bypassing any television interviews , Sky News reports.

However, time traveling may sound fun and rewarding, but it's actually sort of a grind. Sure, you can zip back to the past on occasion and briefly enjoy the company of long-gone relatives. But you complete the journey buck naked and physically depleted, and often the whole experience ends with someone trying to arrest you or beat you up , MiamiHerald.com reports.