Yesterday was a good day to be a TV critic, and specifically to be a fan of "Mad Men," as I got to watch the show's season 3 premiere, and then attended an AMC cocktail party with the show's cast and creators , The Star-Ledger - NJ.com reports. 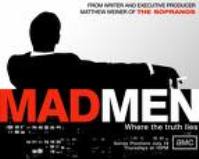 "I don't know what I did first. I think I said yes and then jumped around the room and then threw the phone against the wall and opened the door and made sure I was breathing, but I've loved that show since its inception, I think Tina [Fey, the show's Upper Darby-raised producer and star] is a remarkable talent," he said , Philadelphia Inquirer reports.

Meanwhile, in the opening scene of the new season for AMC's "Mad Men" Jon Hamm's Don Draper stands alone by the stove at the some dark early hour of the morning, heating milk in a copper bottom Revere Ware pan.

For fans of "Mad Men," which returns Aug. 16, this is a comforting moment - and not because of the milk, though warm milk at 4 a.m. has its own value.

The reassurance comes from the copper bottom Revere Ware and its stature in the "Mad Men" world of the 1960s, New York Daily News reports.