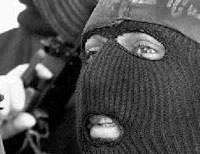 After a standoff lasting several hours, the seven gunmen gave themselves up to a delegation of tribal negotiators, the interior ministry spokesman, Javed Iqbal Cheema, said.

The terrorists, who are armed with rocket launchers, first tried to abduct a health official but thanks to police efforts they failed. After freeing the health official the terrorists rushed into a local school where they took pupils and teachers as hostages.

They promise to free their hostages in exchange for safe passage.

According to anonymous sources two terrorists were killed and one policeman was wounded during the police chase.

Officials could not identify the gunmen or say why they had abducted the health official.