A natural gas explosion destroyed an apartment building in Russia’s Tatarstan region on Wednesday, killing four people and trapping others beneath the rubble in subfreezing temperatures. 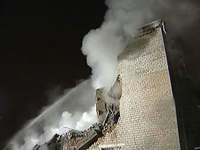 An entire section of the three-story brick building was brought down in Tatarstan’s capital, Kazan, the AP said.

Emergency Situations Ministry spokesman Viktor Beltsov said that up to 10 people could be trapped beneath the rubble and three people – two women and a man – were found dead. One woman has died when hospitalized.

A Gas explosion is the result of a gas leak in the presence of an ignition source. Industrial gas explosions can be prevented with the use of intrinsic safety barriers to prevent ignition.

On July 25, 2007, a series of explosions destroyed a Southwest Industrial Gases, Inc facility in downtown Dallas, Texas. Numerous canisters of acetylene and propane gas in the facility ingnited and were projected from the facility by the explosions. This resulted in the closing of nearby highways Interstate 30 and Interstate 35, an evacuation of the area, and two serious injuries. Fortunately, no casualties due to the incident have been reported.