By Margarita Snegireva. Former Harvard classmates of Benazir Bhutto grieve about her assassination. They remember how a shy 16-year-old girl who just finishe a Catholic School in Pakistan came to study in Radcliff college in 1969. She continued to maintain close relations with Massachusetts after graduating in 1973. 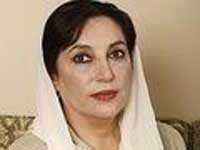 "She was a frequent visitor to the Boston area, she spoke at many events here," said Barry D. Hoffman, Pakistan's honorary consul general in Boston.

At Harvard, where Bhutto studied government, she "quickly made the transition from a shy girl, very protected and two years younger than almost everybody else, to being part of the community," recalled Peter W. Galbraith, Bhutto's university classmate and longtime friend. Galbraith, a former US ambassador to Croatia, met Bhutto on her first day at the university.

"She quickly made friends," said Galbraith, who for 14 years had served as a senior adviser on South Asia to the Senate Foreign Relations Committee.

Bhutto's signature gesture in college was to bake cakes for her friends' birthdays - chocolate cakes with chocolate icing, which she often decorated with her favorite American Halloween staple, candy corn, said Galbraith, whom Bhutto introduced to his first wife.

"I do remember one birthday party, where I met my future wife," Galbraith recalled. "That was in April and [the candy corn] had become quite stale.

"It was a wonderful gesture, but it's good that she went into politics instead. She was not a very good cook, but she was a great friend."

Bhutto's Harvard friends knew her as Pinkie. Galbraith was not sure whether the moniker came to be because she had very pale skin, or "because of the socialist politics of her and her family." (Bhutto's father, Zulfikar Ali Bhutto, was one of Pakistan's most democratically oriented prime ministers.)

Memories of her time at Harvard buoyed Bhutto during the five years she spent in jail for opposing Gen Zia ul-Haq, a military dictator who had imprisoned and executed her father, she told the Harvard Crimson in a 1998 interview.