By Margarita Snegireva. A young 25-year-old Egyptian woman became another victim of bird flu. Apparently, she got the virus contacting the disease from domestic foul, Ministry of Health reported. 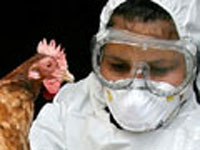 Ola Youness Mohammad, from the town of Beni Soweif , some 200 kilometres south of Cairo, tested positive of the H5N1 strain of bird flu after she was admitted to hospital last Friday, said spokesman Abdel-Rahamn Shahin.

Mohammed died Tuesday night, bringing to 16 the number of Egyptians to have succumbed to the fatal strain since it first appeared in the country last year.

A total of 39 bird flu patients have been registered so far in Egypt, including those who died of the disease, Shahin said.

Mohammed contracted the virus after coming in contact with an infected chicken raised by her family, he said.

Since 1997, studies of H5N1 indicate that these viruses continue to evolve, with changes in antigenicity and internal gene constellations; an expanded host range in avian species and the ability to infect felids; enhanced pathogenicity in experimentally infected mice and ferrets, in which they cause systemic infections; and increased environmental stability."