By Margarita Snegireva. A Chicago woman being angry with her husband who was constantly inviting guests to their apartment stabbed him while he was sleeping. 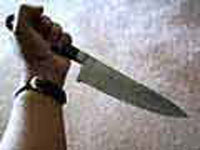 "The defendant told the 911 operator that she went off on her husband, and he was dead," Assistant State 's Attorney Jason Poje said during the bond hearing.

Around 1 a.m. Sunday in their apartment in the 100 block of South Campbell , Barnes stabbed her husband repeatedly with a kitchen knife, Poje said. She then washed the knife and changed her clothes before calling 911, he said.

Barnes told police over the phone she stabbed her husband because "he keeps inviting people over in the apartment, and she wasn't going to take it anymore," a police source said.

In her Monday court appearance, Barnes kept her head down and stared at the floor, refusing to look at the judge or respond when addressed. Her lawyer, Assistant Public Defender Joseph Kennelly, told Boyle, "I did attempt to talk to Ms. Barnes. She did not respond."

Poje said Barnes gave a statement in which she "stated that she had not been taking her meds recently." Boyle ordered a psychiatric evaluation.

Relatives of Alexander Barnes said his wife suffered from mental problems. They had been married for about 25 years, Chicago Sun Times reports.