Suicide bomber kills at least 35 during Islamic holiday in Pakistan

By Dmitry Sudakov. A bomb detonated by a suicide terrorist on Friday morning in a mosque outside the home of the former minister for internal affairs of Pakistan killed at least 35 and injured dozens. The official was receiving guests on an Islamic holiday on the moment when the blast occurred. 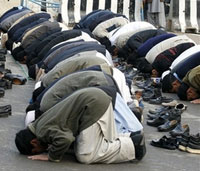 Suicide bomber kills at least 35 during Islamic holiday in Pakistan

The bomb blew up when worshippers were praying for the Eid al-Adha holy day at the mosque in Aftab Khan Sherpao's residential compound in Sherpao. This is a small village located some 25 miles northeast of Peshawar, where pro-Taliban militants of Pakistan are active, the AP reports.

Sherpao was safe, but one of his sons was injured, local authorities said. "Yes, I'm fine," Sherpao told The Associated Press in a brief telephone interview.

The blast killed 35 people and wounded about three dozen others, provincial Health Minister Syed Kamal Shah said. Local police chief Feroz Shah said: "According to my reports so far, 55 are dead but we are checking this figure, and over 100 are wounded."

The blast Friday was the second suicide attack that apparently targeted Sherpao in eight months. Kamal Shah, a top Interior Ministry official in Islamabad, said he was not sure who was behind the bombing. Election-related violence is common in Pakistan, but suspicion over the bombing will likely focus on the pro-Taliban or al-Qaida militants active in the northwestern region of the country.

"We were saying prayers when this huge explosion occurred," said Shaukat Ali, a 26-year-old survivor of the blast.

"It almost blew out our ear drums. Then it was it was like a scene from Doomsday," said Ali, whose white cloak and pants were torn and spattered with blood.

Provincial police chief Sharif Virk said the bomber was praying in a row of worshippers when he detonated the explosive.

Dozens of wounded were taken to hospitals in Peshawar, Charsadda and Tangi.

The hospital in Peshawar was wracked with chaos as injured arrived in pickup trucks, ambulance sirens wailed and wounded screamed for help.

Sherpao was interior minister - Pakistan's top civilian security official - in the administration recently dissolved ahead of January parliamentary elections. He is head of the Pakistan Peoples Party-Sherpao, and is running as a candidate for parliament in general elections next month.

In April, Sherpao was slightly wounded when a suicide bomber attacked a rally for his political party in the nearby town of Charsadda, killing at least 28 people.