A two-day battle took lives of more than 50 Taliban fighters who fled a key southern Afghan town as the militants tried to attack a nearby government center. 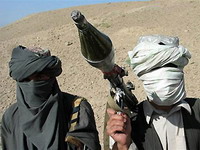 In the east, two NATO soldiers were killed and three others were wounded in a roadside blast, the alliance said.

The southern battle - fought by Afghan soldiers aided by NATO airstrikes - took place in Sangin, Helmand province. Sangin neighbors Musa Qala, which Taliban fighters had controlled since February but abandoned this week in the face of an offensive by Afghan, British and U.S. forces.

"When the terrorists were defeated in Musa Qala, they escaped to Sangin and started firing in and around Sangin," the Defense Ministry said.

Among the 50 militants killed were three foreigners and three commanders, the ministry said. It said no civilians were hurt or killed in the operation.

There was no way to independently verify the death toll at the remote battle site, and NATO's International Security Assistance Force does not release casualty figures for militants.

Afghan, British and U.S. forces moved into Musa Qala's center on Tuesday, and Afghan and British officials have vowed to station troops there and prevent it from falling into Taliban hands again. More than two dozen militants were killed during the battle for Musa Qala, as was one British soldier.

Northern Helmand province is the world's largest opium poppy growing region and has seen the heaviest fighting in Afghanistan this year.

Helmand's governor, Asadullah Wafa, said he and a delegation of officials from the Afghan capital, Kabul, would travel to Musa Qala on Thursday to hand out 5,000 tons of aid, including wheat and blankets, to families who fled the fighting and are now starting to return.

"After 11 months the Afghan flag is again flying over the Musa Qala district center," Wafa said.

All of the tribal leaders in Musa Qala now support the government, Wafa said, adding that Afghan police and army soldiers would have a strong presence there.

In eastern Afganistan, a roadside blast struck a NATO convoy Wednesday, killing two soldiers and wounding two others, the alliance said in a statement.

NATO did not disclose the nationalities of the dead and wounded soldiers or the exact location of the blast. Most of the NATO troops in the east are American.

In other violence, a suicide attacker blew himself up near an Afghan army convoy in the southern city of Kandahar, killing one person, said the provincial police chief, Sayed Agha Saqib. Two soldiers and four civilians were wounded, he said.

This year has been the deadliest since the U.S.-led invasion in 2001. More than 6,200 people have been killed in insurgency-related violence, according to an Associated Press tally of figures from Western and Afghan officials.