At least 11 United Nations employees were killed in the latest terrorist attack in the Algerian capital on Tuesday. 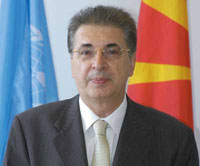 "Words cannot express my sense of shock, outrage and anger at the terrorist attack on the United Nations mission in Algiers today," said U.N. Secretary General Ban Ki-moon, who was traveling in Bali, Indonesia, where he is attending a global climate meeting.

Ban called for an immediate review of U.N. security precautions and policies in Algeria and elsewhere.

"This was an abjectly cowardly strike against civilian officials serving humanity's highest ideals under the UN banner - base, indecent and unjustifiable by even the most barbarous political standard," he said.

Among the U.N. employees killed were two local drivers for the U.N. High Commissioner for Refugees, Okabe said. It is the second time since May that such deaths have struck the Geneva, Switzerland-based refugee agency.

The head of the agency, Ant у nio Guterres, said one of the truck bombs deliberately targeted U.N. offices that housed his agency, the Development Program, the World Food Program, the International Labor Organization and the U.N. Population Fund. The other bomb struck outside Algeria's Constitutional Council, said Interior Minister Noureddine Yazid Zerhouni.

The two local drivers who were killed were among about a dozen employees of the refugee agency who were nearby when the bombs struck. "Just about everyone else suffered an injury, one of them seriously," said Ron Redmond, a spokesman for the refugee agency.

In May, the refugee agency lost a 38-year-old Afghan driver in Kandahar , Afghanistan , when he was shot by an unidentified assailant while on his way to work, according to agency officials.

Al-Qaida in Islamic North Africa, in a posting on a militant Web site, called the U.N. offices in Algiers "the headquarters of the international infidels' den." The two bombings killed at least 26 and wounded nearly 200 on Tuesday.

Jihadists in Iraq who later affiliated with al-Qaida were blamed for attacking the U.N. headquarters in Baghdad in 2003, killing 22.

Before Tuesday, more than 250 U.N. civilian employees had been killed either by violence or in accidents since January 1992, when such record-keeping began, U.N. officials said. Those figures do not include the deaths of U.N. staff from peacekeeping missions.

The mood at U.N. headquarters in New York was somber; the U.N. flag flew at half-mast all day as officials kept updating the death toll among U.N. employees.

About 175 U.N. employees worked in Algeria, including about 115 locally based staff, Okabe said.

He condemned the bombings and pledged to do everything possible to help the victims and their families.

The U.N. Security Council condemned the attacks and extended its sympathies to U.N. staff and their families who were among the victims. "Terrorism in all its forms and manifestations constitutes one of the most serious threats to international peace and security," the council said.