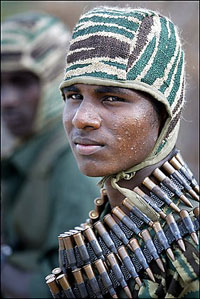 The contradictory versions of the battles highlights the difficulty in getting accurate, independent information on the fighting deep in the jungles of the north, where the government strongly restricts access.

The military announced Wednesday that an additional five rebel fighters were killed in fierce fighting the day before, bringing their death toll for Tuesday's fighting to 37 rebels and five soldiers.

The worst of the fighting broke out Tuesday afternoon when rebels attacked military positions near Adampan in the Mannar district just south of rebel-held territory, said Brig. Udaya Nanayakkara, the military spokesman. Soldiers fought back in a battle that killed 20 Tamil Tiger fighters and three troops, he said.

The rebels' version of the fighting contradicted the military's account. In an e-mail to reporters late Tuesday, rebel spokesman Rasiah Ilanthirayan said the army started the fight at Adampan by trying to cross into rebel-held territory. The Tamil Tigers fought back with artillery, mortar fire and heavy weapons, forcing the army to pull back from a battle that killed 20 soldiers and three rebels, he said.

A further six soldiers were killed in other fighting, bringing Tuesday's death toll to 26 soldiers and three rebels, Ilanthirayan said.

The battles came amid a major escalation in fighting in recent weeks. Senior government officials say they aim to capture rebel-held territory and crush the Tamil Tigers in a bid to end more than two decades of warfare on the Indian Ocean island.

The rebels have fought since 1983 for an independent homeland for ethnic minority Tamils after decades of discrimination under governments controlled by the Sinhalese majority. More than 70,000 people have been killed in the conflict.