The building also housed an unrelated law firm co-founded by French President Nicolas Sarkozy and a Holocaust research foundation, though officials said they did not appear to be targeted. 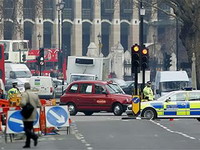 A messenger delivered a package to the law firm, a wooden box that turned out to contain two homemade explosive devices, Interior Minister Michele Alliot-Marie said.

The office secretary opened the package and both explosives went off, killing her and seriously injuring a lawyer. Prosecutor Jean-Claude Marin said the secretary had had no reason to suspect anything out of the ordinary.

The package appeared to have been addressed to the law firm where the explosion occurred, which handles civil and commercial cases, Marin said. He said the nature of the explosive and its strength remained unclear.

Anti-terrorist agents were investigating. An official close to the investigation said the bombing did not bear hallmarks of Islamic or Corsican terrorists, who have staged attacks in France in the past but often use bigger bombs and different methods. The official spoke on condition of anonymity because of the sensitivity of the case.

Alliot-Marie said the injured attorney's life was not in danger despite "very serious" wounds. Police officials identified him as Olivier Brane, a specialist in property law. He was taken to a Paris hospital.

Ten people were being treated for shock, the prosecutor said.

Christian Charriere-Bournazel, president of the Paris bar, said the explosion "had nothing to do with" the law firm that Sarkozy opened with two other lawyers in 1987, because it is not on the same floor as the one targeted. Sarkozy's practice bore his name until his election in May, but is now called Arnaud Claude and Associates.

The bombed office was on the same floor - the 4th - as the Foundation for the Memory of the Shoah. Created in 2000 with an endowment from recovered funds that were confiscated from French Jews during World War II, it supports research and education about the Holocaust and Jewish culture.

Nazi hunter Serge Klarsfeld, after visiting the Holocaust foundation, said it had never received any threats.

Damien Laude, a construction worker across the street from the elegant building described hearing a muffled blast. Afterward, he saw a blonde woman carried out of the building.

"She was completely covered with blood, she was unconscious," he said. Afterward, Laude said, a man with a head wound also emerged from the building.

One window pane was broken on the 4th floor, but there was no other apparent external damage to the building, which also houses several law firms, dental offices and a neurologist's practice.