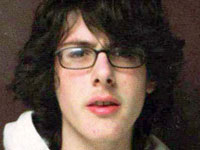 Robert Hawkins had a history of depression but seemed to be doing better since moving in with a friend's family just over a year ago.

But about two weeks ago he broke up with his longtime girlfriend, and this week he was fired from his job at a fast-food restaurant, said a woman whose family took Hawkins in.

On Wednesday, the 19-year-old killed eight people and himself in a shooting rampage at an Omaha shopping mall, police said.

Surgical nurse Debora Maruca-Kovac, whose family took in Hawkins after her 17- and 19-year-old sons befriended him, said she saw victims of the mall shooting being brought in to the hospital where she works.

By then, she had already read a suicide note that Hawkins had left behind.

"I had a feeling it could be him," she said.

She said she and her husband let Hawkins stay with them after he left or was kicked out of his family's house. Court records show that at least once he was termed a ward of the state, which legally removed him from his parents' custody.

"He was depressed, and he had always been depressed," Maruca-Kovac said. "But he looked like he was getting better."

Hawkins, who earned a high school equivalency degree after dropping out of Papillion-La Vista High School, got a driver's license after moving in with the Maruca-Kovacs and five months ago started working at a McDonald's restaurant near their home in a middle-class neighborhood in Bellevue, Maruca-Kovac said.

Two employees of the McDonald's who were eating there Wednesday said they had been told not to talk to anyone about Hawkins.

Hawkins was not on any medication for mental illness, but he had been treated in the past for depression and attention deficit/hyperactivity disorder, Maruca-Kovac said.

Though he had his troubles, Hawkins was gentle and loved animals, Maruca-Kovac said.

But he also had a drinking problem and would occasionally smoke marijuana in his bedroom, she said. Hawkins liked to listen to music and play video games - "normal teenager stuff," she said.

"He was a very helpful young man, but he was quiet," Maruca-Kovac said. "He didn't cause a lot of trouble. He tried to help out all the time. He was very thankful for everything. He wasn't a violent person at all."

Hawkins lived with several friends for a couple days at a time before landing at Maruca-Kovac's house last year, she said.

"He was like a lost pound puppy that nobody wanted," she said. "I felt sorry for him. I let him stay, and we tried to get him on his feet."

Maruca-Kovac, a nurse at Nebraska Medical Center, said she was getting ready for work Wednesday when Hawkins phoned her at about 1 p.m., telling her he had left a note for her in his bedroom. She tried to get him to explain, but he hung up, she said.

Maruca-Kovac said she found the handwritten note on the floor by his bed. She then called Hawkins' mother, whom she said she knows only as "Molly." The woman went to Maruca-Kovac's house, retrieved the suicide note and took it to authorities.

Maruca-Kovac did not hear about the shooting - which a witness said began around 1:50 p.m. - until she arrived at work, where she saw patients being wheeled in.

In the note, Maruca-Kovac said, Hawkins said "how sorry he was for everything." He wrote that he loved his mom and dad and other family members and said he wasn't "going to be a burden anymore."

At the top of the note was his "will," which said that his green Jeep Cherokee was to go to his mother, and that "my friends can have whatever they want."

He ended the note by saying that now he would be famous.