A small plane fell down on synagogue. The pilot died. 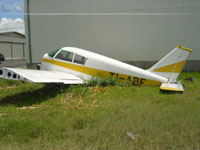 About a dozen people were inside Congregation Children of Israel's Walton Way Temple cooking a meal on Wednesday night, the second day of Hanukkah, but no one was injured, Rabbi Robert Klensin said.

"It's very sad for the pilot who was killed and his family, but it is also a blessing no one else was hurt," said Klensin, who was not at the temple during the crash.

The pilot apparently tried to land in a nearby school parking lot - the only spot around not covered with homes and trees, witnesses said.

"Maybe in the last seconds of life he was looking out for other people," Klensin said.

The single-engine Piper had left Charleston, South Carolina, and was headed to Cartersville, northwest of Atlanta, said Peter Knudson of the National Transportation Safety Board. He said the pilot reported an engine problem to air traffic control before crashing.

Vallirie D. Hooper, who was on her way to choir practice, said the plane "just glided right into the side of the building."

"It was hard to tell if the engines were working," Hooper said. "It was a flash and a flame."

Klensin said it did not appear that the temple sustained any structural damage. The fire and heat melted some of the roof overhang on the west side of the building, he said.

Hanukkah, the eight-day Jewish festival of lights, commemorates the rededication of the Jewish Second Temple in Jerusalem in 164 B.C. after its desecration by the Syrian Greeks.