Hundreds Americans have fled their homes after a fierce storm battered the U.S. Pacific Northwest. The storm killed at least seven people and led to widespread flooding that shut down a stretch of the region's major north-south highway. 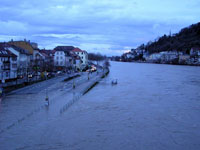 By Wednesday, those who survived the drenching rain and howling wind were hoping for the muddy brown waters to recede so they could return home and see what was left.

Washington Gov. Chris Gregoire, who toured the ravaged region by helicopter Tuesday, touched down at a high school shelter in Chehalis, about 90 miles (145 kilometers) south of Seattle, and also flew to the water's edge on Interstate 5, which has been shut down since Monday at Centralia because of flooding.

The interstate, which is the main north-south route between Portland, Oregon, and Seattle, was expected to be closed at least through Thursday.

In Tillamook, Oregon, home to large dairy cattle herds, the smell of manure was pervasive as shopkeepers downtown shoveled out their businesses.

On the edge of downtown Centralia, waist-high water the color of chocolate milk covered streets as police used small boats to get to houses in flooded neighborhoods.

Firefighters finally persuaded Katrina Puris, 25, to flee her home as her neighbors' cars were floating down the street late Monday night. She had been reluctant to leave with three children under 5 in the house, despite the firefighters' pleas.

"They were yelling: 'If you're not coming out now, we're leaving,"' Puris said Tuesday. "So I just grabbed everything I could and we just ran."

More than 300 people had to be rescued in Lewis County in the southwestern part of the state, many being plucked off their rooftops by helicopter, Sheriff Steve Mansfield said.

The latest of three storms slammed into the state on Monday, hitting hardest on the Olympic Peninsula, Kitsap County and the southwestern corner of the state, leaving at least 73,000 western Washington residents without power. More than 50,000 were still in the dark Tuesday. Pacific Power said that nearly 36,000 of its customers were still without power.

The storm overwhelmed a number of sewage treatment plants, allowing tons of raw sewage to spew into Puget Sound.

Two hikers were found dead Tuesday from an avalanche in the Cascade Mountains, sheriff's officials said. The hikers were killed as heavy rain atop heavy snow increased the avalanche danger.