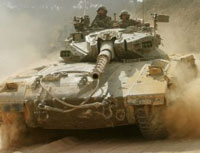 The army spokesman confirmed a strike in the area of Beit Lahiya, saying the target was a group of militants who were about to fire mortar shells.

Israel frequently carries out strikes in the agricultural area in an effort to stop rocket and mortar shell launchings against Israel .

The casualties were all members of the Islamic Hamas group, which rules the Gaza Strip since seizing control in violent fighting in June. Hamas has in recent weeks increased its mortar shellings on Israel , but is rarely involved in the rocket attacks.

Israel insists that the Hamas rulers of Gaza rein in the launchers of the projectiles before it lifts its closing of Gaza crossings, imposed since the Hamas takeover, for the import of goods except foods and humanitarian supplies.

The Palestinian militants fire the crude projectiles almost daily, instilling panic in southern Israel and occasionally causing casualties. Twelve Israelis have been killed by the rockets in the past six years.

On Tuesday alone, Gaza militants fired 21 rockets and mortars against Israel , bringing the total thus far this year to 2,000, the army spokesman said.