An Atlasjet plane was due to land in southwest Turkey early Friday. But it did not reach an airport. The plane crashed on a mountain killing all 57 people on board, including a 6-week-old girl. The cause was not immediately known. 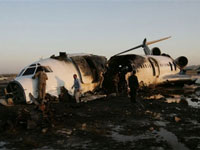 Pieces of wreckage and personal belongings, including suitcases, clothing and magazines, were strewn across the hillside. Rescue workers in bright yellow jackets entered the plane's fuselage, which lay amid boulders and pine trees. Ambulances ferried the dead down a dirt track near the crash site, heading for morgues.

"The seats were detached and all over the place. Some of the seat belts were still around the bodies," said medic Mustafa Dagci, one of the first people to reach the site. "Some bodies were intact, others were in pieces."

The MD-83, carrying 50 passengers and seven crew members, took off from Istanbul around 1 a.m. local time and was headed to Isparta on a flight of about one hour. It went off the radar just before landing at the airport.

At about 7 a.m., a rescue helicopter reached the plane's wreckage near the village of Yesilyurt, in Isparta province, and reported that no one had survived the crash, said Tuncay Doganer, the airline's chief executive.

Doganer said the cause was unknown, but ruled out technical failure or maintenance problems and said the weather and visibility were good.

Ali Ariduru, head of Turkey's civil aviation authority, said there were no indications that terrorism was the cause.

"There is nothing to suggest sabotage," he said.

In the past, militants seeking autonomy for Turkey's Kurdish minority have set off bombs in urban areas and tourist areas along the Mediterranean coast in western Turkey. The area where the crash happened is not a traditional stronghold of the PKK, a Kurdish rebel group that has bases in northern Iraq.

Investigators found the flight data and cockpit voice recorders, which will help them determine the cause of the crash.

"As a nation, our pain is great because of this regrettable accident," Turkish Prime Minister Recep Tayyip Erdogan said in a statement.

Erdogan said initial information indicated the plane was turning when its rear hit the mountainside.

Weeping relatives approached the crash site, but were turned away by soldiers and other officials who sought to comfort them. Many bodies were dismembered and not immediately identifiable, firefighter Osman Emir said.

Ali Ceylan said his 22-year-old daughter-in-law, her 6-week-old daughter and her mother perished in the crash. The baby was born in Istanbul and the family was returning to their home in Isparta.

"We were going to see our grandchild for the first time," Ceylan said. "It's very hard for us. It's enough to make us go mad." He said his son, a police officer, was in shock and being treated with tranquilizers.

Cengiz Dincer, a man at the crash site, said two friends were on the plane after a day trip to Istanbul.

"I keep thinking they'll appear from the site, it is difficult to accept that they are gone," he said. "Of course, it is God's will."

Gulperi Ayan, who also traveled to the crash site, said a friend, stage actor Sakir Ozsoy, was on the plane because he was going to attend his grandmother's funeral in Isparta.

"Now we have two funerals to hold," she said.

Atlasjet said the wreckage of the plane was found on a mountain around 1,500 meters (5,000 feet) high, and that rescuers initially had difficulty reaching the site because of the rugged terrain.

The area where the plane crashed is called Turbe Tepe, which means "Shrine Peak" in Turkish. Much of the wreckage lay amid snow patches 200 meters (650 feet) from the top of the mountain.

Turkish media released a list of passengers. All names were Turkish. The dead included a group of academics who planned to take part in a physics conference at an Isparta university. Among them was Engin Arik, a prominent female nuclear physics professor from Istanbul's Bosporus University.

Dogan agency released a transcript of the conversation between the Atlasjet pilot and the Isparta control tower, but the exchange did not indicate the plane was in trouble.

Atlasjet, a private airline established in 2001, operates regular flights inside Turkey and chartered flights to Europe and other foreign destinations.

In 2005, one of its planes ran off the runway in winter conditions, but the company had not been involved in any fatal accidents.