One man was killed and one wounded in a clash with police on Indonesia's remote Papua province. 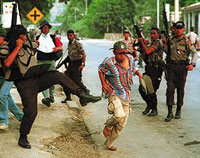 "It was normal procedures to fire warning shots because the assailants threatened" the lives of the police officers, he said.

The confrontation was in the village of Banti, about 100 kilometers (60 miles) from a major mine operated by Freeport-McMoRan Copper & Gold Inc. Police said they were increasing security at the site to prevent violence from spreading.

Tribes in the area - 3,200 kilometers (2,000 miles) northeast of Jakarta - have a history of bad relations. Feuds can last for several weeks and normally only end when the number of victims from either side is equal.

Papua, a vast and impoverished rural farming region, is also home to a small separatist army that is seeking independence for its people who are ethnically and religiously distinct from the main Indonesian population.