Thousands of birds have died from oil spill off the U.S. west coast two weeks ago. The surf scoter, a migratory sea duck already declining in population has suffered most from the disaster. 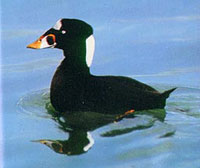 The spill occurred when a cargo ship struck the San Francisco-Oakland Bay Bridge, releasing nearly 60,000 gallons (227,000 liters) of toxic shipping fuel into one of North America's most important estuaries. It came during the fall arrival of hundreds of thousands of migratory birds to San Francisco Bay, where a mild climate and abundant food make it a key wintering ground for shorebirds, seabirds and waterfowl.

At least 1,365 birds have been found dead, and more than 1,000 oiled birds have been captured alive and taken to a wildlife care center in Solano County to be cleaned and rehabilitated.

Although 27 different species are represented, surf scoters make up about 40 percent of the captured birds and more than 25 percent of the dead ones, said Michael Ziccardi, who heads the Oiled Wildlife Care Network that is leading the bird rescue effort.

Scoters, which live on the bay and dive for clams, mussels and sand crabs below, have been disproportionately affected because they spend almost all their time in the areas hit hardest by the spill, scientists say.

The stout sea duck breeds in the remote lakes and wetlands of Canada's northern boreal forests and migrates south to spend winters in San Francisco Bay and other points along the Pacific Coast. A smaller population winters on the Atlantic Coast.

Though not listed as a threatened or endangered, their population - now estimated at 500,000 worldwide - has declined 50 to 70 percent in the past four decades, experts say. About 25,000 to 30,000 are killed each year by sport hunters in the U.S. and Canada, mostly on the Atlantic Coast.

"This oil spill just adds insult to injury and creates greater stress on these birds," said Elizabeth Murdock, who heads the Golden Gate Audubon Society, which has recruited hundreds of volunteers to help recover oiled birds.

Scientists are trying to understand the surf scoter's steep and steady decline. They believe it might be linked to ecological changes caused by global warming in their breeding grounds in Canada's Northwest Territories, as well as by industrial contaminants in their wintering grounds in urbanized areas like San Francisco Bay.

"They're being hit on both sides of their life cycle," said Jeff Wells, a biologist with the Boreal Songbird Initiative and author of "Birder's Conservation Handbook." "It's a major cause for concern. When you see something that drastic, it's telling you something about changes in the environment."

When the oil gets on the birds' feathers, it impairs their ability to keep dry and warm, forcing many to shore - away from their food supply. Some birds become sick when they ingest the fuel while trying to clean their feathers.

In winter, San Francisco Bay is home to around 10 percent of the world's surf scoters, and biologists worry the spill could hurt its future breeding since the oiled scoters were mostly healthy adults.

"It definitely could have an effect on overall populations," said John Takekawa, a wildlife biologist with the U.S. Geological Survey who helped track scoters from the bay to their Canadian breeding grounds. "There could be a lasting effect over time."

Other bird species suffering from the spill include waterfowl such as scaup and ruddy ducks, seabirds like the common murre and shorebirds such as western and eared grebes. Several brown pelicans and marbled murrelets - both federally protected species - were found oiled but alive.

Wildlife workers and volunteers combing the shores continue to find a dwindling number of live and dead birds, but most of the oiled animals will never be found, scientists say. In other spills, only about one in 10 affected birds is recovered.

"We're only seeing a relatively small portion of the overall number of animals impacted," Ziccardi said. "Within two weeks, most of the animals that were initially oiled have been collected or unfortunately have already died."

Biologists say the so-called bunker fuel, which is loaded with pollutants and slow to break down, has entered the food chain. They worry the spill could threaten the bay's ecosystem and wildlife for years.

"Based on other oil spills," said John Bradley, a biologist with the San Francisco Bay National Wildlife Refuge, "it will be months before the cleanup has ended and it will be five or more years before things will be somewhat back to normal."