Bus packed with people found underneath rocks and rubble in China

Workers clearing rocks and mud from a landslide in central China found a bus underneath the rubble Friday, three days after the accident. The bus was buried with 27 people on board. Two others missing were unlikely to be found alive, authorities said. 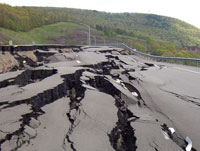 Bus packed with people found underneath rocks and rubble in China

The landslide tore a 50-meter (-yard) gash on a mountainside Tuesday morning and heightened concern that the massive reservoir of the Three Gorges Dam, 200 kilometers (120 miles) away, was wreaking ecological havoc in the region.

The bus was traveling from Shanghai to Lichuan city when the accident occurred. Records from a safety checkpoint the bus passed through showed that there were 27 people on board, said Tang Mingyi, a propaganda official in Hubei province's Badong county who was at the accident site. Xinhua said there were 30 people on board - a figure Tang said was wrong.

The landslide had already resulted in one confirmed death, that of a worker building a tunnel on the slope above the highway, and left two of his colleagues missing.

"There's little hope that they're still alive," Tang said, referring to both those on the bus and the two missing workers.

All told the accident may have killed 30 or more people, a toll high even by the poor safety standards of China's roadways.

The accident happened amid a growing debate over the ecological impact of the Three Gorges Dam, the world's largest hydropower project. A government meeting in September warned about an increase in landslides and other seismic activity as the reservoir level was raised over the past year and sent water seeping into slopes, undermining hillsides of soil and shale.

Chinese officials sought this week to stanch the criticism, playing down the environmental impact of the dam, which has been a pet project of the communist leadership. Officials in comments to state media and reporters have denied any emerging environmental or human catastrophe.

"No one has died, no one has been hurt" in landslides related to the dam, Three Gorges Project Construction Committee spokesman Tong Chongde said Thursday.

Tong said that September's meeting on the dam's ecological impact discussed potential problems, not actual ones.

The recent controversy has raised questions about whether the dam was exacting a price beyond its US$22 billion (EUR 17 billion) construction costs and about the government's decision-making.

Even before ground was broken in 1993, the dam was opposed by environmental and other activists who criticized it as too costly in money and for the million people who had to be relocated. But the government ignored and sometimes violently suppressed the criticisms saying that the dam would generate needed electricity and help control flooding on the Yangtze.

The impact of the reservoir's rising waters are evident in communities in the hilly country nearby. Residents say they are worried and scared about the cracks in their walls and some have felt the ground shift, but feel they have no control over the changes.

In recent weeks, state media and local governments have sketched out new relocation schemes, saying as many as 4 million people may have to be moved from areas near the dam's reservoir in a form of "environmental migration." Among those migrants were many who had previously been forced to move for the dam.