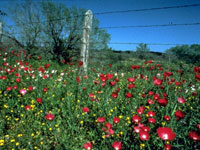 The three were on their way from Arlington, near Dallas, to Abilene when the Piper single engine fixed wing crashed just after 3 p.m. , Senior Trooper Sparky Dean of the Texas Department of Public Safety said in a news release.

The two people in the front seat were instructor Robert William Davey, 29, and Luca Visani, of Cesena, Italy . Andrea Venturini, of Mantova , Italy , was in the back seat, Dean said. No age was available for the two from Italy.

The plane crashed about nine miles (14.48 kilometers) from the airport in Ranger, the news release said.

The victims were confirmed dead at the scene. The bodies have been taken to the Tarrant County Medical Examiners Office for autopsies.

Officials with the Federal Aviation Administration are investigating, Dean said.