A passenger train crashed into a truck and derailed in central Poland, two people were killed and 13 injured. 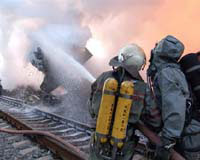 The train, traveling from Gdynia on the Baltic Sea cost to Zielona Gora in the southwest, rammed into the truck north of Bydgoszcz, in central Poland, police spokeswoman Katarzyna Witkowska said on TVN24 television.

The train's conductor and a female passenger died in the crash, and the injured were rushed to hospitals in Bydgoszcz, Witkowska said.

Television footage showed the train's engine and four cars had rolled onto their sides after derailing, while the roof of a first-class carriage was ripped open.

"From initial information, we know that the driver of the truck drove onto an unmarked railroad crossing and the train hit the truck," Witkowska said. "But it's hard to say right now who is to blame for the accident."