Minor explosion in laboratory causes evacuation of US university building

Georgia Tech university was evacuated after a minor explosion in a laboratory. 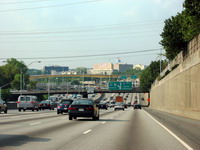 Minor explosion in laboratory causes evacuation of US university building

Public relations director Lisa Grovenstein said no one was injured during the noon blast at the Ford Motor Co. environmental science and technology building which also houses classrooms.

The university's emergency notification system was activated by accident after the explosion, sending e-mails, text messages or voicemail to everyone on campus, she said. A follow-up notice was sent letting the campus know that the notification was a mistake.

The university and the Atlanta Fire Department were investigating the cause of the explosion.

Universities in the U.S. have been anxious to relay news of an emergency quickly to students and staff following an April shooting massacre at Virginia Tech. In that incident a gunman killed two people and two hours later killed another 30 before fatally shooting himself in what became the worst mass-shooting in modern U.S. history.

Virginia Tech came under fire for what critics said was a slow response to the crisis.