Seven workers were killed and 15 injured in a bridge collapse that had been under construction in a new development in Dubai, police reported. 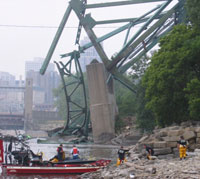 The workers were employees of the Wade Adams Group, a Middle East-based contracting company, said N.M. Naushad, the company's human resources director, without confirming the number of dead and injured.

The bridge, spanning a small canal, was being built in Dubai Marina, a new residential and commercial development in this booming Gulf city-state.

Police cordoned off the scene with tape to investigate, and ambulances took away the bodies of the dead and injured as their colleagues from the construction site stood around and watched, witnesses said.

Officials from Rashid Hospital in Dubai said they admitted 15 injured workers, including five with serious injuries, who were airlifted from the accident site. Both the police and hospital officials spoke on condition of anonymity because they were not authorized to talk to the media.

"We tried to put a huge piece of metal in a wall when it collapsed," said Muthu Raj, one of the 30 Indian workers he said were on the bridge when it collapsed. "I saw colleagues trapped inside, but I managed to jump back and stepped on the road."

Raj Kumar, head of safety for a nearby site where the Al Hamad Contracting Company is building a high-rise, told The Associated Press at the accident scene that the Wade Adams Group workers were not properly equipped to ensure their safety because they did not have helmets, gloves, proper shoes or harnesses.

"I know this because I am in charge of safety at my construction site and we are safe and properly equipped," said Kumar.

Naushad, the Wade Adams Group official, said his company would compensate the families of the dead workers with a total of 90,000 dirhams (US$24,508, Ђ16,686). He said the injured workers would also be compensated but did not provide a specific figure.

In recent weeks, several labor strikes have occurred in Dubai, which depends heavily on cheap labor from Asia for its capitalist boom. Most of the workers say their salaries are too low and they are often not paid on time.

The Emirates' cabinet has ordered labor officials and construction companies to review salaries and possibly set a minimum wage in an effort to avert turmoil on the labor market.