US military helicopter crashes in Italy 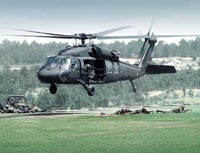 US military helicopter crashes in Italy

Italian new agencies reported Thursday that a U.S. helicopter had crashed in the country and five people were believed to have been killed.

A spokesman at the U.S. Air Force base in Aviano, near Venice, said the base was looking into the report, but had no confirmation on the number of deaths.

ANSA news agency said the helicopter may have been a Black Hawk, and was carrying about 10 people when it crashed in the countryside outside of Treviso.

Without citing sources, ANSA and Apcom news agencies said five people were believed to have been killed and another five injured.