A landslide slammed into a rain-swollen river and wiped out a tiny hamlet in southern Mexico. Rescuers were searching for more than a dozen missing people. 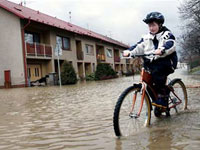 At least 16 people were reported missing in the village, the latest victims of widespread flooding and heavy rains across Mexico and Central America. In Honduras, authorities were evacuating dozens of people on the Atlantic coast and at least two people drowned in floodwaters, including a 2-year-old boy swept away by a raging river.

Residents of San Juan Grijalva said they were awakened late Sunday by a rumbling roar and the sound of rocks rolling down from surrounding mountaintops.

"It was a roar, like a helicopter was passing overhead," recounted farmer Domingo Sanchez, 21. "We didn't know what was happening, and then we went outside, and there were cracks opening the earth. We ran up the hill ... but soil kept coming down on us."

For the next several hours, Sanchez, his mother, his wife and a cousin fought for their lives in a valley where the only salvation lay in getting to higher ground as the ground collapsed around them. They reached the hilltop just in time to look across the valley and see a landslide cover the home of his grandparents. Sanchez believes at least nine of his relatives were buried.

A cousin, David Sanchez, 22, described the events he saw from his house in a different part of the village that once was home to about 600 people.

David Sanchez described two distinct waves - the first of which swept his mother about 200 meters (yards) downstream before he could rescue her.

After climbing up a hillside to safety, in a moment of calm he and three friends briefly descended to rescue some possessions when the second wave - apparently the release of water briefly dammed up by the landslide - swept down the valley.

"It swept away everything, trees, houses, everything," David Sanchez said.

Chiapas state Gov. Juan Sabines, who visited the scene, described one of the waves as a "mini-tsunami" and noted "this village practically disappeared."

Helicopters searched the surrounding hills to rescue residents who fled to higher ground.

Chiapas officials and the federal Interior Department placed the number of missing at 16. No bodies were immediately found.

The landslide followed a week of devastating flooding and heavy rains that left 80 percent of Mexico's Gulf coast state of Tabasco under water, destroying or damaging the homes of about half a million people.

On Monday, officials readied huge pumps to suck water from the inundated streets of the state capital, Villahermosa, while rescuers struggled to reach thousands still stranded days after one of the worst floods in Mexico's history.

After Hurricane Katrina struck the U.S. in 2005, Mexico sent a convoy of about 200 unarmed soldiers and medical personnel across the border with portable kitchens and water treatment equipment to aid recovery efforts.

Authorities said two more bodies were found Sunday in the waters covering much of the region. If the deaths are confirmed to have been caused by the flooding, the disaster's death toll would stand at 10, not including those feared deaths from Monday's landslide.