The latest fire in a series of deadly blazes in Russia killed at least 30 people in a nursing home. 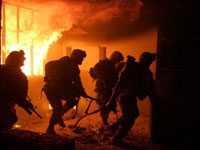 The fire broke out Sunday afternoon in the two-story nursing home in the Tula region, south of Moscow, and burned quickly through the 55-year-old brick building with wooden walls, Emergency Situations Ministry spokesman Viktor Beltsov said.

Fire inspectors earlier had asked courts to order the home closed because of fire safety violations, including the lack of an alarm system, he said.

More than 250 people escaped or were evacuated from the building and hospitalized or placed in other nursing hones, but emergency workers found bodies in the wreckage overnight and through the day, Beltsov said. On Monday evening, more than 24 hours after the fire broke out, the death toll stood at 30, he said.

Most of the victims, and possibly all of them, were elderly residents of the nursing home in the town of Velye-Nikolskoye, about 250 kilometers (155 miles) south of Moscow, Beltsov said. Some survivors jumped from the second floor to escape.

"When the room filled with smoke - black carbon monoxide fumes - I knew I wouldn't have time to ties sheets together and decided to just jump out the window," an unidentified man with a gray mustache told NTV television, lying in a hospital bed with a cast on his leg. "I jumped, and lost consciousness for a while."

The fire was likely caused by a short circuit or carelessness, Beltsov said.

He said it appeared personnel at the home were to blame for the high death toll. Firefighters were only alerted of the blaze half an hour after it broke out, and employees "did not organize the effective evacuation" of residents, he said, citing preliminary information.

A nurse countered that account, saying employees rushed to evacuate residents, many of them bedridden.

"They had to be carried out on stretchers, on gurneys, pushed through windows," Valentina Chernikova said on state-run Vesti-24 television. "I think we did this very quickly."

Twice in the past year following inspections, fire authorities appealed to courts to order the facility shut down because of "glaring violations" of fire safety rules, Beltsov said. He said the building had no fire alarm and no system that would automatically alert the fire department of a blaze.

Fires at hospitals, schools and other state-run facilities have served as grim reminders of official corruption and negligence, crumbling infrastructure and short life expectancy that plague Russia despite oil-fueled economic improvements under President Vladimir Putin.

In March, a fire in a nursing home in southern Russia killed 62 people. A nearby fire station had been shut, and it took firefighters almost an hour to get to the site from a larger town after a night watchman ignored two fire alarms before reporting the blaze, authorities said.

A nursing home fire in Siberia in June killed 10 people.

In December, locked gates and barred windows prevented victims from escaping a blaze that killed 46 women at a drug treatment center, pointing to conditions now common in post-Soviet Russia's state-run institutions. Inspectors had recommended its temporary closure earlier in the year because of safety violations.

Russia records nearly 18,000 fire deaths a year, several times the per capita rate in the United States and other Western countries.