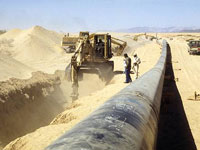 Yemen's official news agency SABA quoted Ahmed Fandar, a Marib security official, as saying a "group of saboteurs" were behind the explosion, which halted the flow of oil.

Fandar said the culprits placed a bomb under the pipeline that was timed to explode. He did not identify the identities of the bombers but said the Marib security department was investigating the incident.

The security official did not comment on earlier reports that the explosion set the surrounding area ablaze.

Al-Qaida militants have been active in sabotage operations against oil pipelines and power stations in the country.

In June, Yemeni security arrested two men suspected of al-Qaida links who confessed to an unsuccessful attempt to blow up an oil pipeline with TNT near the port city of Aden. Yemen produces 330,000 barrels of oil a day.

In August, al-Qaida militants attacked a power station and a government building in Marib, some 140 kilometers (85 miles) east of the capital, San`a, causing a major power outage. The attack was a response to an earlier raid by security forces who killed a senior al-Qaida operative in the area and three other militants.

Al-Qaida has an active presence in Yemen, the ancestral home of Osama bin Laden, despite government efforts to fight the terror network. Al-Qaida was blamed for the 2000 bombing of the USS Cole in Aden that killed 17 American sailors and an attack on a French oil tanker that killed one person two years later.