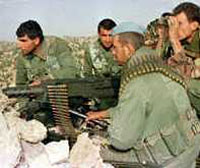 But Erdogan came to Washington expecting the United States to take action against Kurdish rebels staging cross-border attacks from Iraq into Turkey. So far, the U.S. has been unable to deliver.

During a trip to Turkey last week, Secretary of State Condoleezza Rice promised to redouble efforts against the Kurdistan Workers Party, or PKK. But her Turkish counterpart, Foreign Minister Ali Babacan, made clear his government was not satisfied.

"We are at the point where words have been exhausted and where there is need for action," Babacan said Friday.

Turkish leaders have now signaled that a decision on what to do about the rebels may hinge on what Erdogan can bring back from Washington to a Turkish public that favors military action in Iraq .

"Rice's visit only raised expectations in Turkey ," said Bulent Aliriza, director of the Turkey project at the Center for Strategic and International Studies, a Washington think tank. "If President Bush does not make clear that he is willing to take direct action against the PKK or make the Iraqi Kurds take such action, Erdogan may not be able to resist a military operation."

Mark Parris, a U.S. ambassador to Turkey in the late 1990s and now a visiting fellow at the Brookings Institution, said that Monday's meeting would the last chance for the Bush administration to repair strained relations with Ankara .

"If Erdogan hears something relatively reasonable and concrete you can put this relationship back together," Parris said. "If not, that effort might have to wait for a new administration."

The Bush administration worries that a cross-border incursion would bring instability to what has been the calmest part of Iraq , and could set a precedent for other countries, like Iran, who also have conflicts with Kurdish rebels. For weeks, the Bush administration has been stressing the need for a diplomatic solution between Turkey and Iraq.

Rice said the U.S. was looking at enhancing its intelligence and information sharing with Turkey and that she had begun talking with Turkish leaders about long term solutions.

Following a meeting in Istanbul with Iraqi officials, including Prime Minister Nouri al-Maliki, during a conference on Iraq , Rice won a pledge that Iraq would step up efforts to fight PKK terrorism. Later Saturday, Iraqi Kurd authorities shut down the Irbil and Sulaimaniyah offices of the Kurdistan Democratic Solution party, an organization that allegedly had close ties to Kurdish guerrillas.

But Turkey was still looking for more from the United States .

"I am expecting that this trip will result with the United States ... taking solid steps," Erdogan prior to leaving Turkey for Washington Saturday.

The intensity of Turkey's demands on the PKK has risen as hit-and-run raids by the rebels and other fighting have left dozens of soldiers and civilians dead in recent month. The skirmishes were the latest in a conflict that dates back to 1984 and has seen nearly 40,000 people killed.