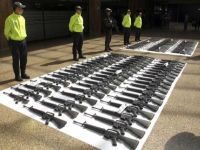 In an unprecedented agreement, the government of Colombian President Juan Manuel Santos and the Revolutionary Armed Forces of Colombia (FARC) signed on Monday (27), in Havana, Cuba, an agreement to end the armed conflict in the country, which has lasted almost 50 years.

The guerrillas gave several statements seeking a way out of the situation in Colombia through dialogue. The content of the agreement will be revealed soon by the Colombian representative, according to the multistate TeleSUR TV.

"Everything evolves very well and the conversations go from strength to strength, according to the reported common position" to both parties, Jan Egeland, UN representative in Colombia, stated to AFP.
The two sides agreed on Saturday (25), with the development, within a year and a half, a new design that brings together the claims of FARC, without, however, being "radical."

From Oslo to Havana
The formal completion of negotiations is scheduled for the month of October in Oslo, Norway. "From there, delegates from the government and the guerrillas will turn back to Havana with a willingness to negotiate until they come out with the signing of a peace pact to end nearly 50 years of conflict," stated TeleSUR.
According to the program presented by the Colombian authorities, the delegates' travel to Norway should include a visit to the Storting (unicameral parliament) where they will participate in a debate on participatory democracy.

The director of information TeleSUR, Jorge Enrique Botero, stressed that the peace process began to be born in May last year, when they began secret talks in Havana, which involved monitoring of Venezuela, Cuba and Norway.

Also according to the broadcaster, the architects of this process by the FARC guerrilla commander were Mauricio, better known as El Doctor, who succeeded Jorge Briceno, known as Mono Jojoy. Also participating in the rebel delegation are Rodrigo Granda, Mark Calarcá and Andrés Paris.

For the Colombian government participated in the process the current Security Advisor, Sergio Jaramillo, the Environment Minister, Frank Pearl and Enrique Santos Calderón, the president's brother.

First step to peace
In August 2011, through the then maximum leader of FARC, Alfonso Cano, the guerrillas announced a desire to undertake peace talks that put an end to the war that Colombia has lived for nearly half a century.

In video posted by the time New Colombia News Agency (Anncol) and sent to all media, Cano recalled that in his inaugural address, he promised to leave behind "hatred that had characterized the eight years of the previous government" .

In a letter published in April this year, the guerrillas said their willingness to dialogue with the caveat that "sit talking does not mean any kind of surrender and delivery. The reincorporation into civilian life implies and requires a different Colombia." And the statement emphasized that "the will is official. So certainly we strive for peace among all."

The way forward is not through arms
On Monday (27), the Attorney General of Colombia, Eduardo Montealegre, said that "the way out of the Colombian conflict is not the path of weapons."
On the radio, Montealegre reiterated that "overcoming this conflict of so many decades is through a peace process" and stressed that "peace is a duty and a constitutional right."

Author`s name: Editorial Team
21:05
Video shows how Ukrainian military men are treated at detention facility
20:50
Horoscope for May 28, 2022: Too many surprises for everyone
19:20
Nuclear war scenario may materialise should Washington supply MLRS to Ukraine
18:49
Bloomberg: Germany's actions against Russia put Austria at risk
18:21
American laboratories found in Nigeria where monkeypox began to spread
17:34
Truss says what'll happen to the West if Russia wins the Ukrainian conflict
16:47
Newsweek explains why Russia is preparing Kalibr missiles after US statements
16:23
Expert says Zelensky might face a military coup in the coming weeks
15:57
Video: Foreign mercenaries fire grenade launcher at Russian BTR in Ukraine
15:48
Zaporozhye official says Kyiv is preparing the surrender of the region
World
Viktor Yanukovych: Ukraine on the verge of total annihilation