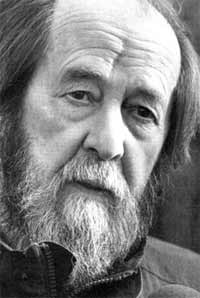 Stepan Solzhenitsyn told The Associated Press his father died late Sunday of heart failure, but declined further comment. Solzhenitsyn's unflinching accounts of torment and survival in the Soviet Union's labor camps riveted his countrymen, whose secret history he exposed. They earned him 20 years of bitter exile, but international renown.

And they inspired millions, perhaps, with the knowledge that one person's courage and integrity could, in the end, defeat the totalitarian machinery of an empire.

Beginning with the 1962 short novel "One Day in the Life of Ivan Denisovich," Solzhenitsyn devoted himself to describing what he called the human "meat grinder" that had caught him along with millions of other Soviet citizens: capricious arrests, often for trifling and seemingly absurd reasons, followed by sentences to slave labor camps where cold, starvation and punishing work crushed inmates physically and spiritually.

His "Gulag Archipelago" trilogy of the 1970s left readers shocked by the savagery of the Soviet state under the dictator Josef Stalin. It helped erase lingering sympathy for the Soviet Union among many leftist intellectuals, especially in Europe.

But his account of that secret system of prison camps was also inspiring in its description of how one person - Solzhenitsyn himself - survived, physically and spiritually, in a penal system of soul-crushing hardship and injustice.

The West offered him shelter and accolades. But Solzhenitsyn's refusal to bend despite enormous pressure, perhaps, also gave him the courage to criticize Western culture for what he considered its weakness and decadence.

After a triumphant return that included a 56-day train trip across Russia to become reacquainted with his native land, Solzhenitsyn later expressed annoyance and disappointment that most Russians hadn't read his books.

During the 1990s, his stalwart nationalist views, his devout Orthodoxy, his disdain for capitalism and disgust with the tycoons who bought Russian industries and resources for kopeks on the ruble following the Soviet collapse, were unfashionable. He faded from public view.

But under Vladimir Putin's 2000-2008 presidency, Solzhenitsyn's vision of Russia as a bastion of Orthodox Christianity, as a place with a unique culture and destiny, gained renewed prominence.

Putin now argues, as Solzhenitsyn did in a speech at Harvard University in 1978, that Russia has a separate civilization from the West, one that can't be reconciled either to Communism or western-style liberal democracy, but requires a system adapted to its history and traditions. Putin's successor Dmitry Medvedev sent condolences shortly after the report of Solzhenitsyn's death, Russian media cited the Kremlin as saying.

"Any ancient deeply rooted autonomous culture, especially if it is spread on a wide part of the earth's surface, constitutes an autonomous world, full of riddles and surprises to Western thinking," Solzhenitsyn said in his speech. "For one thousand years Russia has belonged to such a category..."

Born Dec. 11, 1918, in Kislovodsk, Solzhenitsyn served as a front-line artillery captain in World War II, where, in the closing weeks of the war, he was arrested for writing what he called "certain disrespectful remarks" about Stalin in a letter to a friend, referring to him as "the man with the mustache."

He was sentenced to eight years in labor camps -- three of which he served in a camp in the barren steppe of Kazakhstan that was the basis for his first novel. After that, he served three years of exile in Kazakhstan.

That's where he began to write, memorizing much of his work so it wouldn't be lost if it were seized. His theme was the suffering and injustice of life in Stalin's gulag - a Soviet abbreviation for the slave labor camp system, which Solzhenitsyn made part of the lexicon.

He continued writing while working as a mathematics teacher in the provincial Russian city of Ryazan.

The first fruit of this labor was "One Day in the Life of Ivan Denisovich," the story of a carpenter struggling to survive in a Soviet labor camp, where he had been sent, like Solzhenitsyn, after service in the war.

The book was published by order of Soviet leader Nikita Khrushchev, who was eager to discredit the abuses of Stalin, his predecessor, and created a sensation in a country where unpleasant truths were spoken in whispers, if at all. Abroad, the book - which went through numerous revisions - was lauded not only for its bravery, but for its spare, unpretentious language.

After Khrushchev was ousted in 1964, Solzhenitsyn began facing KGB harassment, publication of his works was blocked and he was expelled from the Soviet Writers Union. But he was undeterred.

"A great writer is, so to speak, a secret government in his country," he wrote in "The First Circle," his next novel, a book about inmates in one of Stalin's "special camps" for scientists who were deemed politically unreliable but whose skills were essential.

Solzhenitsyn, a graduate from the Department of Physics and Mathematics at Rostov University, was sent to one of these camps in 1946, soon after his arrest.

The novel "Cancer Ward", which appeared in 1967, was another fictional worked based on Solzhenitsyn's life: in this case, his cancer treatment in Tashkent, Uzbekistan, then part of Soviet Central Asia, during his years of internal exile from March 1953, the month of Stalin's death, until June 1956.

In the book, cancer became a metaphor for the fatal sickness of the Soviet system. "A man sprouts a tumor and dies - how then can a country live that has sprouted camps and exile?"

The Stalinist era, he wrote, quoting from a poem by Alexander Pushkin, forced Soviet citizens to choose one of three roles: tyrant, traitor, prisoner.

He was awarded the Nobel Prize for Literature in 1970, an unusual move for the Swedish Academy, which generally makes awards late in an author's life after decades of work. The academy cited "the ethical force with which he has pursued the indispensable traditions of Russian literature."

Soviet authorities barred the author from traveling to Stockholm to receive the award and official attacks were intensified in 1973 when the first book in the "Gulag" trilogy appeared in Paris.

"During all the years until 1961," Solzhenitsyn wrote in an autobiography written for the Nobel Foundation, "not only was I convinced that I should never see a single line of mine in print in my lifetime, but, also, I scarcely dared allow any of my close acquaintances to read anything I had written because I feared that this would become known."

The following year, he was arrested on a treason charge and expelled the next day to West Germany in handcuffs. His expulsion inspired worldwide condemnation of the regime of Soviet leader Leonid Brezhnev.

Solzhenitsyn made his homeland in America, settling in the tiny town of Cavendish, Vermont, with his wife and sons.

Living at a secluded hillside compound he rarely left, he called his 18 years there the most productive of his life. There he worked on what he considered to be his life's work, a multi-volume saga of Russian history titled "The Red Wheel."

Although free from repression, Solzhenitsyn longed for his native land. Neither was he enchanted by Western democracy, with its emphasis on individual freedom.

To the dismay of his supporters, in his Harvard speech he rejected "Western pluralistic democracy" as the model for all other nations. It was a mistake, he warned, for Western societies to regard the failure of the rest of the world to adopt the democratic model as a product of "wicked governments or by heavy crises or by their own barbarity or incomprehension."

Some critics saw "The Red Wheel" books as tedious and hectoring, rather than as sweeping and lit by moral fire.

"Exile from his great theme, Stalinism and the gulag, had exposed his major weaknesses," D.M. Thomas wrote in a 1998 biography, theorizing that the intensity of the earlier works was "a projection of his own repressed violence."

Soviet President Mikhail Gorbachev restored Solzhenitsyn's citizenship in 1990 and the treason charge was finally dropped in 1991, less than a month after the failed Soviet coup. Following an emotional homecoming that started in the Russian Far East on May 27, 1994, and became a whistle-stop tour across the country, Solzhenitsyn settled in a tree-shaded, red brick home overlooking the Moscow River just west of the capital.

While avoiding a partisan political role, Solzhenitsyn vowed to speak "the whole truth about Russia, until they shut my mouth like before."

He was contemptuous of President Boris Yeltsin, blaming Yeltsin for the collapse of Russia's economy, his dependence on bailouts by the International Monetary Fund, his inability to stop the expansion of NATO to Russia's borders, his tolerance of the rising influence of a handful of Russian billionaires - who were nicknamed "oligarchs" by an American diplomat.

Yeltsin's reign, Solzhenitsyn said, marked one of three "times of troubles" in Russian history - which included the 17th century crises that led to the rise of the Romanovs and the 1917 Bolshevik revolution. When Yeltsin awarded Solzhenitsyn Russia's highest honor, the Order of St. Andrew, the writer refused to accept it. When Yeltsin left office in 2000, Solzhenitsyn wanted him prosecuted.

The author's last book, 2001's "Two Hundred Years Together," addressed the complex emotions of Russian-Jewish relations. Some criticized the book for alleged anti-Semitic passages, but the author denied the charge, saying he "understood the subtlety, sensitivity and kindheartedness of the Jewish character."

Putin, Yeltsin's successor, at first had a rocky relationship with Solzhenitsyn, who criticized the Russian president in 2002 for not doing more to crack down on Russia's oligarchs. Putin was also a veteran of the Soviet-era KGB, the agency that, more than any other, represented the Soviet legacy of repression.

But the two men, so different, gradually developed a rapport. By steps, Putin adopted Solzhenitsyn's criticisms of the West, perhaps out of a recognition that Russia really is a different civilization, perhaps because the author offered justification for the Kremlin's determination to muzzle critics, to reassert control over Russia's natural resources and to concentrate political power.

Like Putin, Solzhenitsyn argued that Russia was following its own path to its own form of democratic society. In a June 2005 interview with state television he said that Russia had lost 15 years following the collapse of the Soviet Union by moving too quickly in the rush to build a more liberal society. "We need to be better, so we need to go more slowly," he said

Following the death of Naguib Mahfouz in 2006, Solzhenitsyn became the oldest living Nobel laureate in literature. He is survived by his wife, Natalya, who acted as his spokesman, and his three sons, including Stepan, Ignat, a pianist and conductor, and Yermolai. All live in the United States.

Despite his belief in a separate political and cultural fate for Russia, Solzhenitsyn's works continue to inspire people of all nations and cultures in the fight for human dignity and the right to hold unpopular views.

His belief in the power of conscience, and of courage against all odds, speaks to readers beyond the narrow limits of ideology and politics.

"It is we who shall die - art shall remain," he wrote in his 1970 Nobel lecture, which he was not allowed to deliver. "And shall we comprehend, even on the day of our destruction, all its facets and all its possibilities?"