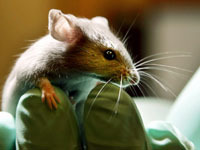 Sustaining the flickering hope that human aging might somehow be decelerated, researchers have found they can substantially extend the average life span of obese mice with a specially designed drug.

The drug, SRT-1720, protects the mice from the usual diseases of obesity by reducing the amount of fat in the liver and increasing sensitivity to insulin. These and other positive health effects enable the obese mice to live 44 percent longer, on average, than obese mice that did not receive the drug, according to a team of researchers led by Rafael de Cabo, a gerontologist at the National Institute on Aging, according to New York Times.

The drug is one of a set of chemicals designed by Sirtris - a small Cambridge, Mass., pharmaceutical company - to mimic resveratrol, the trace ingredient of red wine thought to activate protective proteins called sirtuins.

The sirtuins help mediate the 30 percent extension of life span enjoyed by mice and rats that are kept on very low-calorie diets. Since few people can keep to such an unappetizing diet, researchers hoped that doses of resveratrol might secure a painless path to significantly greater health and longevity.

But large doses of resveratrol are required to show any effect, so chemical mimics such as SRT-1720 were developed to activate sirtuin at much lower doses, reports Boston Globe.

In the study, the drug protected the mice from obesity-related diseases by increasing their sensitivity to insulin and reducing the amount of fat in their livers. Obese mice given the drug lived 44 percent longer than obese mice that were not, the newspaper reports.

The research findings "demonstrate for the first time the feasibility of designing novel molecules that are safe and effective in promoting longevity and preventing multiple age-related diseases in mammals," National Institute on Aging gerontologist Rafael de Cabo and his colleagues wrote in the journal Scientific Reports. The work was published Thursday, informs Newsmax Health.