A little bit of alcohol staves off memory problems 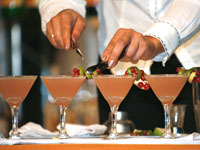 Researchers reviewed 143 studies comprising more than 365,000 participants from 19 countries. Their analysis is published in Neuropsychiatric Disease and Treatment.

Moderate drinkers were 23 percent less likely to develop dementia, Alzheimer's disease and other forms of "cognitive impairment," a phrase used to describe a decline in thinking skills. Moderate drinking is generally defined as a maximum of two drinks per day for men and one drink per day for women.

On the other hand, heavy drinking (more than three to five drinks per day) was associated with a higher risk of dementia and cognitive impairment, but the researchers said this finding was not statistically significant.

"We don't recommend that nondrinkers start drinking. But moderate drinking -- if it is truly moderate -- can be beneficial," study co-author Edward J. Neafsey, a professor in the department of molecular pharmacology and therapeutics, said in a Loyola University Medical Center news release.

Wine appeared more beneficial than beer or spirits, but that finding was based on a relatively small number of studies, the study authors noted, informs U.S. News & World Report.

For people who drink responsibly and in moderation, there's probably no reason to quit. But because of the potential for alcohol to be abused, Neafsey and Collins do not recommend that abstainers begin drinking.