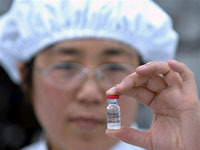 The combination pill is called Complera, and it is approved for patients who have not previously been treated for HIV. Gilead's drug Truvada is a combination pill containing the drugs emtracitabine and tenofovir, and it was approved in August 2004. Edurant, or rilpivirine, was developed by Johnson & Johnson's Tibotec unit and was approved in May, informs BusinessWeek.

Analyst Thomas Wei said in a research note expectations for Complera are low due to an increased rate of virologic failure seen in late-stage testing. Wei said doctors placed it as their third choice when considering prescriptions for front-line regimens over the next year.

The analyst said Complera could fall to fourth when Gilead launches its four-drug quad pill to replace Altripla, the current preferred treatment and the cornerstone of the drugmaker's HIV franchise. The survey found that doctors expect the quad pill to gain significant market share from Atripla if it proves superior in a late-stage trial. Results from that are expected in this quarter, according to Forbes.

Complera should not be co-administered with certain anticonvulsants (such as carbamazepine, oxcarbazepine, phenobarbital, phenytoin), certain antimycobacterials (such as rifabutin, rifampin, and rifapentine), or proton pump inhibitors such as lansoprazole and omeprazole, because these could result in loss of virologic response and result in resistance to the drug, according to the company.

The most common side effects from rilpivirine included insomnia and headache; the most common adverse events with emtricitabine and tenofovir were diarrhea, nausea, fatigue, headache, dizziness, depression, insomnia, abnormal dreams, and rash, MedPage Today says.