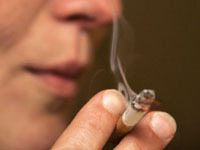 Smoking is more likely to give women heart disease than men, a study has found.

Toxic chemicals in tobacco smoke may have a more potent effect on women due to biological differences, scientists believe.

US researchers analysed pooled data on around 4 million individuals from 86 studies. After adjusting for other risk factors, they found the increased risk of heart disease linked to smoking was 25% higher for women.

The longer a woman smoked, the greater her heart disease risk was compared with that of a man who had smoked for the same length of time. A woman's extra risk increased by 2% for every additional year she had been smoking, says The Guardian.

Women smokers have double the risk of lung cancer compared with their male counterparts, and often suffer more aggressive forms of the disease.

The latest review looked at 75 sets of data, which included 67,000 coronary heart disease events such as heart attacks.

The risk ratio of smoking compared with not smoking for coronary heart disease was found to be 25 per cent higher in women than men.

This increased by 2 per cent for each additional year of follow-up, meaning that the longer a woman smokes, the higher her risk of developing heart disease becomes compared with a man who has smoked the same length of time, Times of India reports.

The chief executive of Heart UK, Jules Payne, said: "Smoking cessation policies and practice should take account of differences between the genders in order to optimise effectiveness in targeting both men and women."

Jane Landon, deputy chief executive of the National Heart Forum, said: "In many countries around the world, women are viewed as a growth market by tobacco companies.