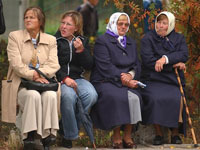 A multi-center study led by researchers from the University of California, San Francisco, has indicated that elderly women who suffer from sleep apnea are about twice as likely to develop dementia in the next five years as those without the condition.

The findings showed for the first time what sleep specialists have long suspected but hadn't proved: sleep apnea, also known as sleep-disordered breathing, can deprive the brain and other organs of the oxygen they need and, may, over time, trigger declines in cognitive ability, informs Times of India.

The study of 298 women, who had an average age of 82, looked at all kinds of sleep disorders and took into consideration how many hours of sleep subjects got, how often their sleep was interrupted and, among those with sleep apnea, how often they stopped breathing during the night. Although the study looked only at women, it's likely the results apply to men too.

Researchers found that only the breathing problems were strongly associated with an increased risk of developing cognitive impairment. Among women who had sleep apnea at the start of the study, 45 percent developed either mild cognitive impairment - often an early stage of dementia - or dementia after five years.

About 31 percent of women without sleep apnea developed cognitive impairment. None of the women had dementia at the start of the study, according to San Francisco Chronicle.

The study examined women with moderate sleep apnea-15 or more breathing stoppages per hour-so the cognitive impact among those with milder sleep apnea wasn't clear, said Amy Aronsky, medical director for the Center for Sleep Disorders in Longview, Wash., who wasn't involved with the study. However, the finding "gives further proof to the idea that untreated sleep apnea has a lot of unintended consequences," Dr. Aronsky said.

Treatments for sleep apnea include devices that force oxygen up patients' airways, known as continuous positive airway pressure, or CPAP, oral devices placed in the mouth to prevent the blockage of the airway, and surgery. Among these treatments, there is the strongest evidence showing CPAP is effective, according to the Agency for Healthcare Research and Quality's report, but patients often don't use CPAP machines because they can be cumbersome and uncomfortable, reports  Wall Street Journal.