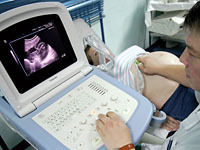 Scientists have been making rapid progress in identifying which of your genetic traits may be associated with the risk of getting a wide variety of diseases.

They have also been making rapid progress in getting access to genetic material during pregnancy, according to a new report. That means expectant parents may be able to accurately tell what sex the baby will be as early as seven weeks into a pregnancy, says msnbc.com.

A boy is a boy is probably a boy. That's according to a new study that finds that those noninvasive genetic tests used to determine whether a fetus is male or female are surprisingly accurate, as early as seven weeks of pregnancy.

The paper, released Tuesday in the Journal of the American Medical Assn., described a meta-analysis of 57 studies representing 3,524 male births and 3,017 female births.

The researchers found that tests that look for fragments of the baby's DNA in a sample of the mother's blood are about 95% to 99% accurate, depending on several factors. They can be used well before ultrasound (at 11 weeks) and aren't invasive, unlike amniocentesis, which carries a small but real risk of miscarriage, according to Los Angeles Times.

Devaney and colleagues noted that a disadvantage of fetal DNA blood testing is the need to validate female sex, because the test looks for male, or Y-chromosome, DNA. Also, the test is not currently available at the doctor's office, has not yet been approved by the Clinical Laboratory Improvement Amendments (CLIA), and is not currently reimbursed by insurers.

They also noted that many of the included studies were small, so it would be "beneficial to help validate test performance under highly controlled testing conditions."

This could also help test manufacturers to "ensure that their claims are accurate," as some companies that directly market the tests to consumers say their products have an accuracy of 95 percent to 99 percent as early as five to seven weeks' gestation, informs ABC News.