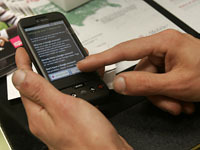 Youths using cell phones do not face a higher risk of brain cancer, a new study says. However, two California scientists who have looked at the report say that's not the whole story, according to Public News Service.

Scientists say the study is important, because it is the first of its kind to focus on children.

The study's authors compared the cellphone habits of nearly 1,000 children in Western Europe, including 352 with brain tumors and 646 without. Kids who used cellphones were no more likely to develop a brain tumor than others, according to the study of children ages 7 to 19, published online Wednesday in the Journal of the National Cancer Institute, says USA Today.

In the past two decades, cellphone use has soared among children in developed countries, with one study suggesting that most youths start to use mobile phones by age 9 or 10. Children have a developing nervous system, and cellphone emissions penetrate deeper into their brains. Studies have indicated that the outer brain tissue of children ages 5 to 8 may absorb twice the amount of cellphone energy absorbed by adult brains.

Public health data indicate no increase in brain tumors among children in the U.S. and many parts of Europe, whether from cellphone usage or any other cause. The latest research "shows that a large and immediate risk of cellphones causing brain tumors in children can be excluded," said Martin Roosli, lead author of the study and an epidemiologist at the Swiss Tropical and Public Health Institute in Basel, reports Wall Street Journal.