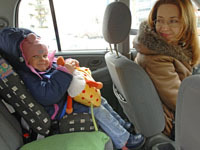 Kids may be safest in cars when grandma or grandpa are driving instead of mom or dad, according to study results that even made the researchers do a double-take.

"We were surprised to discover that the injury rate was considerably lower in crashes where grandparents were the drivers," said Dr. Fred Henretig, an emergency medicine specialist at Children's Hospital of Philadelphia and the study's lead author, reports Columbus Dispatch.

"Perhaps grandparents are made more nervous about the task of driving with the 'precious cargo' of their grandchildren and establish more cautious driving habits to offset these challenges," the researchers wrote.

If that's the case, figuring out what grandparents are doing right could help others protect children, Henretig and colleagues suggested.

However, the study couldn't indicate who were safer drivers overall since it only included crashes without any drive-time denominator.

Northwestern University Professor Joseph Schofer, a transportation expert not involved in the research, noted that the average age of grandparents studied was 58.

"Grandparents today are not that old" and don't fit the image of an impaired older driver, he said. "None of us should represent grandparents as kind of hobbling to the car on a walker."

Grandparents did flub one safety measure. Nearly all the kids were in car seats or seat belts, but grandparents were slightly less likely to follow recommended practices, which include rear-facing backseat car seats for infants and no front-seats. But that didn't seem to affect injury rates, according to The Australian.