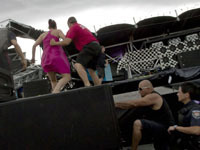 The main stage at Ottawa Bluesfest collapsed Sunday night during a Cheap Trick concert as a severe thunderstorm sent the musicians and thousands of fans running for cover. At least five people were injured, one seriously.

Cheap Trick's band members got off the stage safely, but witnesses said they were thrown off their feet.

"Everyone is okay and we are so lucky to be alive and hope that all the fans are okay too," the band, best known for hits including "Surrender", "I Want You to Want Me" and "The Flame", said in a message posted on Facebook, according to Seattle Post Intelligencer.

Eyewitnesses attending Ottawa's Bluesfest Sunday evening say the first sign of the approaching storm came when cold air suddenly replaced the hot, muggy weather. Around 7:30 p.m., black clouds, lightning and driving rain followed, and a wind so strong that it folded the stage up in a manner of seconds.

The band Cheap Trick was on stage, singing their hit I Want You to Want Me when the storm clouds approached. The band posted a message on its Facebook site later in the evening. "Everyone is shaken up but band and crew are all fine," it states, "Cheap Trick hopes that everyone who attended the show is also ok", reports Globe and Mail.

Environment Canada, the weather office had a thunderstorm warning in effect for Ottawa, saying winds were expected to reach 56 mph (90 kph).

Blues fest is one of North America's main musical events. The festival first took place in 1994 and has since grown from a one-stage, three-day event to a multi-staged, 12-day music showcase featuring some of the best international talent, informs NDTV.com.