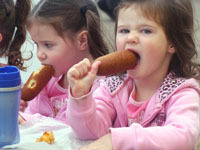 Food allergy in children is more common than previously thought, and often is associated with severe symptoms and multiple foods, a new survey found.

The prevalence of food allergy in children and adolescents younger than 18 was 8% (95% CI 7.6 to 8.3), according to Ruchi S. Gupta, MD, of Northwestern University in Chicago, and colleagues, according to MedPage Today.

Eight percent of children younger than 18 suffer from allergies - nearly 6 million kids in the U.S. - and nearly 40 percent of those youngsters had suffered a severe reaction to certain foods, according to Gupta, a pediatrician and researcher at Children's Memorial Hospital in Chicago. More than 30 percent of those children were allergic to multiple foods, the study found.

The results are based on a nationally representative sample of almost 40,000 online surveys of parents of children younger than 18. They suggest that prevalence of food allergies might be twice as high as other large recent studies have found. Although the cases were reported by the parents themselves, the questions were developed specifically for food allergies and the responses were vetted by an expert panel, Gupta said, msnbc.com reports.