Flaxseed acts only as placebo for postmenopausal women 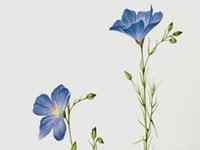 A new study presented at the American Society of Clinical Oncology has found that daily consumption of flaxseed is no more effective than a placebo in blocking symptoms.

Flaxseed is widely thought to be beneficial because it contains phytoestrogens, chemicals produced by plants that mimic the effects of mammalian estrogen, according to Xinhua.

The study consisted of 188 postmenopausal women who were split into two groups.

One group ate a flaxseed bar each and every day, while the other consumed a placebo protein bar daily over a period of 6-weeks.

The idea was to see if the flaxseed bar had any impact on the hot flashes these women went through.

What researchers found is that there was no statistically significant difference in the group who consumed the flaxseed compared to the group who did not.

This study has effectively killed the hope that flaxseed is a way in which hot flashes could be reduced, informs SmartAboutHealth.